The Ada 95 Lovelace Tutorial, an interactive, Web-based tutorial designed to teach Ada 95 to programmers who already know another language, has been updated by author David A. Wheeler to version 5.7. 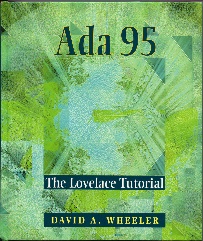 The book can be ordered on-line from the Ada Home Bookshop, in the Introduction to Programming with Ada section.

Information added about the book version, now that it has become available. Some minor modifications to ease downloading and installation, and a few cosmetic changes.